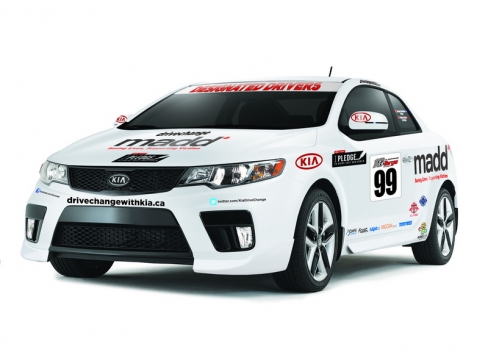 It is finally official! This Keenan and that Kia are headed to the Rock along with my fellow Autonet.ca journalist and CTCC driver Jacques Deshaies. And, beginning next week, you can follow us on Twitter, Facebook and, of course, Autonet.ca.

I’ll post again when I have some links for you to follow our progress day by day. I’ve even signed up for a Twitter account that I hope to send updates from from right inside the action!

This is one event worth staying tuned in for. Check out the full press release after the jump…

Mississauga, ON, September 2, 2011 – Kia Canada is participating, for the second year in a row, in the Targa Newfoundland rally and putting MADD Canada in the driver’s seat by sponsoring their school assembly program implemented to reduce impaired driving among youth.

For the occasion, a race-prepped Kia Forte Koup donated by Kia Canada will be driven by a team of two members from Autonet.ca: pro-driver Jacques Deshaies will be at the wheel and Shaun Keenan as co-pilot. Both will represent team “Designated Drivers,” racing under number “99” which references the year in which Kia Canada was established.

For the 2011 edition, the team is racing with the goal of promoting their partner, MADD Canada, thus raising awareness of the dangers of impaired driving and reinforcing the need to always drive responsibly.

To reinforce this message the Kia Koup has been specially wrapped to debut its “I Pledge to drive safe and sober” campaign. With every stop during the rally, spawning across wide sections of Newfoundland, local youths will be exposed to the cars and drivers and will be encouraged to pledge to this important cause by signing the Koup race car.

Teens and young adults are at particularly high risk for impaired driving. Motor vehicle crashes are the leading cause of death among 15- to 25-year-olds and alcohol is a factor in 45% of those crashes. The combination of drugs and driving is also a major concern; Canadian youth between the ages of 14 and 25 have one of the highest rates of cannabis use in the world.

“Kia Canada is excited to renew its participation with Targa Newfoundland and to have pro driver Jacques Deshaies and Shaun Keenan represent as team ‘Designated Drivers” said Maria Soklis, Vice President and Chief Operating Officer (COO) Kia Canada Inc. “As an automotive company, Kia is proud to support MADD Canada in their quest to educate Canadians on the importance of driving responsibly.”

In addition, each vehicle will be wrapped in the “I Pledge” special finish similar to the Kia Koup race car which will allow students to sign the vehicle as a way of showing their commitment to never driving under the influence.

“Kia Canada Inc. is making an impact,” said MADD Canada National President Denise Dubyk. “With Kia’s assistance, we will deliver our important message to more than one million students across this country, helping them to understand the dangers of impaired driving and reinforcing the need to always drive responsibly. It’s a message that will save lives.”

After competing in the Targa rally, the vehicle will tour the vast majority of auto shows in Canada and will be seen at the Kia Canada display for the 2012 auto show circuit.

Kia was among the earliest corporate supporters of Targa, fielding a then-new Kia Rio for the media team of auto writer Bob English and local radio personality Ken Ash in the inaugural Targa Newfoundland in 2002. Over the next three years, Kia cars won class honours for the company several times.

Kia Canada Inc. (www.kia.ca – www.facebook.com/kiacanada), a maker of quality vehicles for the young-at-heart and a subsidiary of Kia Motors Corporation (KMC) in Korea, was founded in 1999. It sells and services high-quality class-leading vehicles like the Soul, Forte and Sorento through its network of 172 dealers nationwide. Kia Canada Inc. employs 141 people in its Mississauga, Ontario headquarters and four regional offices across Canada. Kia Motors Corporation continues to showcase the company’s global commitment to surpassing customer expectations through continuous automotive innovation.

MADD Canada (Mothers Against Drunk Driving) is a national, charitable organization that is committed to stopping impaired driving and supporting the victims of this violent crime. With volunteer-driven groups in more than 100 communities across Canada, MADD Canada aims to offer support services to victims, heighten awareness of the dangers of impaired driving and save lives and prevent injuries on our roads.