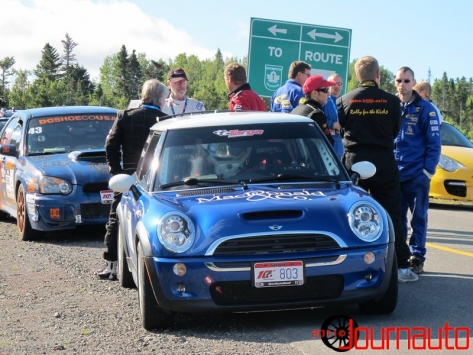 As I write this post on my Blackberry on the long transit stage between Pleasantview 2 (2-7) to the final two stages of the day (Gander 1 and 2), I can’t help but think how lucky I am to be here in this great province.

The weather today is fantastic – warm and sunny without a cloud in the sky.

The field has been behaving today and, so far every car that started the day, is excited to be heading back to the city to run flat out on neighbourhood streets, crescents, drives, avenues and the like.

Road conditions on leg two have been fairly good – certainly less bumpy than yesterday – but, we’re really looking forward to the town stages (Jacques, a road racer, hasn’t seen a real apex in days) where the majority of turns are square and in quick succession on a smooth surface (relative I’m sure). All roads are about the same width with curbs on either side and most corners will have a storm drain dip in the apex.

I made a lot of progress with my navigating skills today, making changes to the route book and odometer on the fly, and calling out instructions like you might expect somebody’s who’s done this before. I’m sure Jacques is feeling more comfortable too, but I’ve learned I can actually control him somewhat by what I say and when I say it. Like, if I want him to slow down, I just tell him there’s a blind crest into square right at T in 100 metres instead of 300.

We’re about 20 klicks outside Gander now, having just left the Appleton Town Hall where we gave out some of our hero cards and did a meet and greet with the townsfolk. They even fed and watered us, just like they did for stranded air travelers back in September 2001.

The hospitality here is second to none. These people are great. They make me proud to be Canadian.