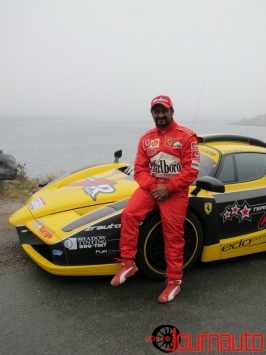 This morning we awoke to fog, which turned into rain not long after we got onto the 135 km long transit between Clarenville and Marystown. In fact, the first stage of leg four (Boat Harbour) was the first one we ran in the wet.

That said, it was like we were running the first stage of the first day again since it was something we hadn’t experienced before. ‘Will there be traction?’ ‘How will stopping distances be affected?’ And, more than a few people told us the wooden bridges would be like ice; “Ice bridges with jumps onto them?” I’d inquire. ‘Yes.’

At any rate, we completed the stage three seconds over our base time. It wasn’t hard either. In fact, we caught up to the local AE86 entry of Chris Hiscott and tailed him for close to 18 kms on the 24 km long high speed stage. Then we ran the reverse of the stage (called Petit Forte) on drier pavement roughly an hour later and shaved 11 seconds off our base, which is unnecessary in the Targa class, but very fun indeed (especially when chasing a hachi-roku).

We made a small error on the very short next stage, which cost us a few seconds of penalty time.

On the fan favourite Marystown South stage, the convoy experienced its second cancellation, which you’ve probably heard about by now… The leader of the Hot Tour group lost control of his multimillion dollar Edo Competition Ferrari Enzo on a patch of gravel and tagged a 4×4 post and railing before sliding backwards down a steep embankment strewn with big hard Newfoundland boulders and into the drink. Driver and co-driver are uninjured, however, repairs will likely be in the order of hundreds of thousands of dollars.

The canceled stage became a transit for the rest of us to drive through and show our appreciation to the great people of this beautiful province. Normally, the cars are sent 30 seconds apart to give drivers a chance to have a clean time, but this was more like a horsepower parade.

A new crew from Penney Kia in St. John’s joined the team today. Big thanks to Brent Doyle and Bobby Hennessey for fixing a flat tire (a brand new one just installed last night) we got on the 30 km transit between Garnish (4-5) and the lunch stop in Fortune, and for getting the car all ready for the fifth and final leg on Friday.

We have officially made it to day five and haven’t missed a stage yet (knock on wood). There are still 500 kms left in our journey (440 on public roads and 60 on closed competition stages) and we’re stoked about getting to the finish line. It’s been a tough and tiresome week, but the end is near.

If Hurricane Maria thinks she can stop us now, she’d best think again because we have other plans.