Soldiering On: Life, Luck, Racing and Second Chances on the Rock 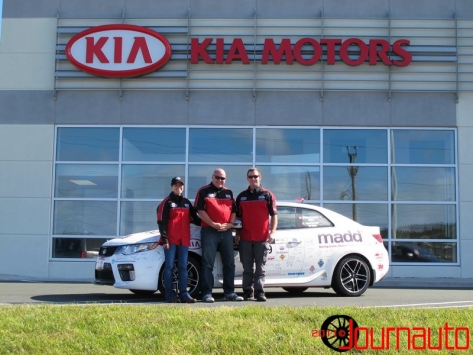 Targa Newfoundland is a week-long 2,200-kilometre tarmac rally held annually throughout eastern and central Newfoundland. It is one of three internationally recognized Targa events and quite possibly Canada’s most-grueling motorsports event.

The route is made up of approximately 40 competitive Targa stages where the road is closed to public traffic. The stages are linked by non-competitive Transit sections where provincial vehicle traffic laws apply.

Rain or shine, on Saturday, September 10, 2011, the 10th anniversary edition will start in St. John’s with yours truly sitting in the co-driver’s seat next to CTCC driver, AJAC journalist and fellow Autonetter, Jacques Deshaies. We’ll be rockin’ last year’s Kia Forte Koup SX rally car on “The Rock” in what will surely be our biggest test of automotive stamina and will.

After meeting up in St. John’s, Jacques and I will attend Targa School on Bell Island on September 8 and 9 prior to the event to get acquainted with the car and each other. There’s a practice day on Saturday and ceremonial racing on Sunday, but the rally doesn’t officially start until Monday morning.

The prospect of running this automotive marathon with limited experience is a bit unnerving. I’m confident in Jacques’ eyes, hands and feet to supply the go; but, there’s still the matter of my having to make sure we don’t get lost, get too cocky or drive too slow/fast, all while spewing orders from the route books I’ll be taping to my lap.

Participating in the Targa Newfoundland has been on my bucket list since my start in this industry about 10 years ago. Last year, I nearly got the chance. My friend Crash (his real name is Kevin) found himself a pretty sick little rally car in the UK – a Honda S2000-powered MK1 Ford Escort – and signed us both up. Not one to pass up once-in-a-lifetime opportunities, I said yes of course.

Throughout the summer, the car underwent several modifications to bring it to Crash’s liking. We did some basic rally training, attended navigation school and our preparations were all going by plan. Things were coming together…

I’m in Nashville, Tennessee for an event when my cell phone rings. It’s my 21-weeks pregnant and happy wife calling, but she’s anything but. She’s calling from the hospital and sobbing incoherently when she gives me the devastating news, “We lost the baby.”

She’d come home from work and was simply taking our dog out for a walk before heading to our last prenatal class when she suffered a freak accidental fall. She landed right on her belly and hit the ground so hard that Christina Kate didn’t have a chance. That’s life.

I call Kevin a few days later, now two weeks before we’re to meet up in St. John’s and attend Targa School, to tell him what happened and that I’m pulling out.

Though I felt terrible for putting Kevin into that position, it was the right thing for me to do as my thoughts were elsewhere.

Meanwhile, the Kia Forte Koup SX rally car ran strong in its class with driver Adam Hill and navigator Mark Kostick in contention early on. Unfortunately, their luck ran out on day three of the rally when their engine threw a rod out the bottom of the block in the middle of a competition stage.

Fragments of the piston were said to have been found embedded in a tire of the Acura TL entry of Canadian Forces combat veterans Corporal Andrew Knisley and Master Corporal Jody Mitic. The rookie rally teammates (a.k.a. Team Soldier On) are both amputees.

On CTV’s W5, they joked about their competitor’s car having the initials “k-i-a,” which of course, is military speak for “killed in action.”

Kia’s Team Wishful Thinking managed to find a new engine and install it quickly, but with the damage in the standings already done, their fate had been decided. That’s racing.

Fast forward to today and we’re all soldiering on. Literally and figuratively.

Jacques and I are confident this car will prove its durability on some of the most technical and demanding roads you’ll find anywhere.

This year, we’ll race across Newfoundland for MADD Canada’s school assembly program to help raise awareness of the dangers of impaired driving and reinforcing the need to always drive responsibly. At every stop during the rally, local youths will take the “pledge to drive safe and sober” by signing the Koup rally car.

Last year, the Kia Forte Koup Targa rally car helped raise more than $100,000 for the Children’s Wish Foundation of Canada. And, as part of a campaign to raise funds to help with the rehabilitation of their (Our) injured comrades, Team Soldier On is returning with Knisley and newcomer Master Corporal Michael Trauner to prove that having physical disabilities doesn’t mean you’re stuck on the sidelines.

All of these charities are for great causes. Two organizations that have helped my wife and me immensely over the past year are Perinatal Bereavement Services Ontario (PBSO) and Bereaved Families of Ontario (BFO).

The road of life can be tough. Optimism and hope are what keep me going. I feel very lucky to be getting a second chance at Targa. With some of the toughest roads yet ahead, I’m off to find some four-leaf clovers and sew them into my helmet. Not that I’m superstitious or anything.