From Rock star back to reality 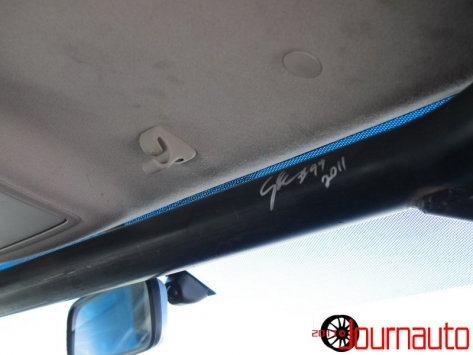 Following two days of rally school, a day of practice, one prologue day, and a full five days of competitive racing, I’m sad, happy and ultimately relieved the 2011 Targa Newfoundland is in the books. Let it be known, this was no cake walk.

It’s been a tough slough and the Kia Forte Targa Koup crossed the finish line without so much as a few scrapes to the underbody. Our team got stronger as each day passed and we accomplished all of our goals, and then some by placing in the top 10 in our class against more powerful, expensive race cars like Porsche 911’s, Subaru STI’s, big block muscle cars and even a Dodge Viper. Having spent half of my time in Newfoundland calling the shots while riding in shotgun with my friend Jacques Deshaies, I am looking forward to a few days of rest, relaxation and reflection back at home.

I arrived in St. John’s more than a week ago as a rookie with almost no experience and an outsider. Jacques and I had never even driven in the same car with one another, so we have accomplished something very special for ourselves, Kia Canada and for our Targa 2011 partner, MADD Canada. Today, I depart St. John’s as a more experienced navigator, Targa finisher and trophy plate winner, as well as a proud new member of the Targa family.

Most days began before sunrise and would have us in the car until at least 6 PM. Then we’d spend a couple hours talking with fans and signing autographs at the nightly car shows along our route. A late dinner would usually follow before we even set foot in hotel for the night. I would then spend a couple more hours each night marking up the route book to prepare us for the next day’s leg. Then, I would have to spend even more time sorting through photos and write my daily blog, as well as double check the day’s results before getting into bed after midnight (even later a couple times).

Pretty much everyone involved with the Targa Newfoundland battles sleep deprivation and mental and physical stress throughout the week. It is truly exhausting and takes realistic goals, focus and dedication and teamwork to make it to the finish line. Anyone who’s been to Targa Newfoundland and says differently is flat out lying.

Speaking of flat out, the Forte Koup took lots of abuse at the hands of my driver. He drove it as hard and fast as he could and the Koup didn’t let us down. The suspension bottomed out a few times along with the front and rear corner body panels. On the last day, the underside slammed so hard on the ground going through a compression at lightning speed we thought for sure there would be damage. But, it wasn’t the case. In fact, the only damages it suffered on our 2,200-km adventure were a flat tire we got during a short transit stage and a scuffed right rear wheel as a result of hitting a curb in one of the town stages. We also had our crew from Gander Kia top up our coolant and change the brake pads after the braking-heavy Gander stages, but that was the extent of things.

Other teams were not so lucky. Many were forced into making critical repairs long into the night (some every night) to be able to make the start line and run bright and early the following day. Ottawa’s Eurotrash Motorsports not only had to rebuild its rare 1993 Audi 80 Avant after a scary off-road excursion during the Targa school on Bell Island, but their nightly persistence paid off as the car continually and miraculously improved each day on route to the finish. Driver Emil and his father Boris Poliakov always wore smiles on their faces, and assisted other unlucky or struggling teams throughout the rally before crossing the line themselves some eight days after their incident. If ever there was an example of the “Targa Spirit” that’s necessary to see this event through to completion, these guys are it – top of class and congrats boys!

As for Team Kia Canada, we finished our rally in 10th place in Targa Modern class, good for sixth in our division with 8:25 in total penalties over all 37 stages. The final results for Modern are still provisional, however, as there are several outstanding issues and inquiries to be addressed in our class. It’s a fact that 28 cars left the starting line along with us, and that only 23 made it to the end to collect a Finisher’s Medal in Modern.

Targa Newfoundland is a battle of attrition as much as it is a race. In total, 61 cars left the start line on Monday and only 51 crossed the finish on Friday. Fifty percent of these completed every competition stage under Trophy time. In the other Targa categories, Rob Pacione and Brian Maxwell won Open with 5:39 in penalties driving the green Dodge Challenger SRT8. Scott Giaonnou and navigator Ray Felice became back-to-back winners in Targa Classic with 1:04 in penalties in their 1981 Porsche 911 SC. Congratulations to all who competed in the 2011 Targa, especially those who drove it start to finish.

Five stages were canceled during the event. On day one, the Southport stage was closed due to a local emergency. Harbour Grace was scratched before it even began. Hurricane Maria shut down Little Bay East and Harbour Mille on the final day. And, Marystown South was made into a transit stage after part of the course was renamed “The Enzo Straight” we drove through in parade.

I would like to thank Kia Canada and Autonet.ca for this opportunity of a lifetime; the Targa organization for putting on an incredible life-changing event; my instructors, coaches and fellow Targa competitors (past and present) for helping prepare me for the ultimate unknown; our service crews from Penney Kia and Gander Kia; the thousands of volunteers who worked tirelessly to keep things moving along throughout what has been the most exhausting week of my life. Most importantly, a heartfelt thank you to the wonderful people of this province, who welcomed us onto their roads and into their neighbourhoods with open arms, cheered for us at every corner, treated us like rock stars, and even kept our bellies full with home cooked meals along the way. None of this would have been possible without all of you/them.

Humbled and grateful, I salute you. I already miss my new family and hope I’ll be able to make it back some day soon. Until then, it’s back to reality.