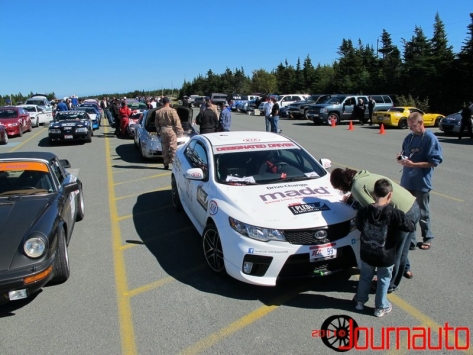 The Prologue is an official, unofficial day of racing that gives teams old and new a chance to practice before the official start of the 2011 Targa Newfoundland.

Following the mandatory breathalyzer test (we’ll do this every day) the morning began with an all-hands meeting for drivers and co-drivers where organizers discuss regulations, safety procedures, courses notes, changes and other last minute details.

Every morning, organizers post a bulletin, which lists changes to the routes, rules and other important things pertaining to the Targa. For an example, check out the results pages on the official website (http://www.targanewfoundland.com/results) which, of course, is where you’ll be able to see the results from each day of the rally.

Today’s bulletin didn’t have too many amendments. Unlike yesterday, this kept many a navigators (like myself) up late inscribing them into their books.

Anyway, we rolled out of the Re/Max Centre around noon and made our way to St. John’s Pier 7 for the ceremonial start event at the Keg restaurant. Hundreds of locals cheered us on as we pulled away from the start line… A quick left, then right and, hey wait, where are we supposed to turn next? A quick U-turn followed by a right up a hill and we were back on track…. momentarily.

Navigating downtown St. John’s is a bit tricky, so I was glad to see that there were at least a half dozen other cars, including the rest of the cars in our class, trying to find their way. We caught a break when a few of the more experienced drivers came into view and we all feel in line.

Speaking of experience, I’m now part of the Targa Newfoundland family and several return competitors, including past overall winner Jim Kenzie, Doug Mepham, Jud Buchanan and Glen Clarke have been immensely helpful getting us up to speed on all kinds of things

Kenzie’s navigator has been feeding me tip after tip on navigating. He showed me ways to mark up the route book that will help me stay on course and give the right instructions at the right time so that Jacques can drive fast with confidence.

I must say, the enthusiasm the local people have for this event and its participants is really heartwarming. At lunch, our convoy stopped at Cape St. Francis Elementary School where hundreds of students and their families welcomed us like rockstars. We signed some autographs and even got a few of our own, which is awesome because not only does this make our car more special, these are pledges  “To drive safe and sober.”

We met all of our Trophy times on the three Prologue stages in Flatrock and Torbay 1 and 2. We made a couple mistakes on 1-2, but nothing that cost us any significant time. In fact, we made our base times on all the prologue stages (1-1, 1-2, 1-3) meaning no time penalties, though the results show differently. (Look at everybody’s 1-3 times.)

The official start of Targa Newfoundland’s 10th anniversary event begins tomorrow morning. We’ll head straight for the first stage in Holyrood some 50 km southwest of the capital before winding up in Gander in the evening.

As they say in these parts. Steady as she goes.