Time to get real 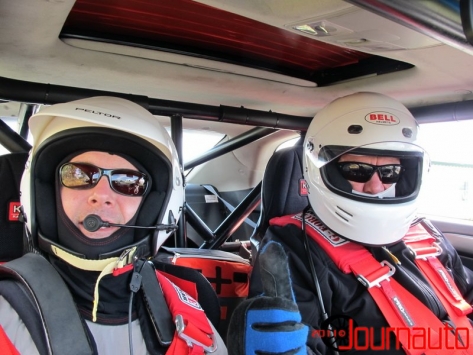 Today was the second and final day of Targa School for Jacques Deshaises and I. For this, we awoke early and drove to Portugal Cove to catch the ferry over to Bell Island in the middle of Conception Bay.

Whereas yesterday focused on navigation and getting acquainted with each other in the car, today we drove our first real rally stage. Okay, well it was a practice stage, but it was a real closed stage with real marshals, real timing gear and many more things we’ll be encountering throughout our Targa Newfoundland adventure.

Jacques got a good feel for the car today and I’m starting to get the hang of calling out instructions from over in the right seat. Our equipment is all working and our red Kia racing suits arrived just after lunch time. There’s a lot going on in the car and, the faster we go, the more it seems like there is to do. A couple of times I told him to go right when I actually meant left, but during the rally I will have much better stage notes, which really seemed to help in the afternoon practice session.

Of course, there are real consequences in this event and little mistakes can quickly turn into big ones if you’re not careful as one of our fellow teams has already discovered. The Audi wagon took a long drive off a short cliff, landing nose first some 20 feet below the road after the driver miscalculated a corner. Fortunately, the father and son team from Ottawa are unhurt. However, with technical inspection set to being bright and early tomorrow morning, they’re either going to be up late rebuilding their entire front end, OR, they might just pack it in and go home.

It’s unfortunate, really, as we all attended this school to help reduce the risk of something like this happening during the week. Their week may already be over, days before it even begins.

As for our team, we’re not overconfident and hope to stay that way. Our goals for the 2011 Targa Newfoundland remain the same: to arrive at the finish line on Friday in one piece, having completed all stages with as few mistakes as possible, and have fun doing it all. We’ll make like tortoise and bag a whole whack of hares.