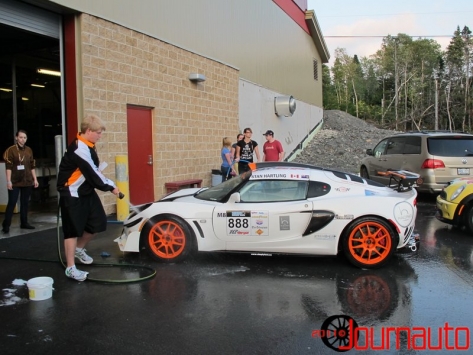 The town stage in Gander last night was a real trip and, despite taking a whole bunch of time penalties on it, we ran it as hard and fast as the Kia Forte Targa Koup would allow. We’re still well under our trophy time, which is great, but we’re not there yet.

The Gander stage is really tight and the only way we could have gone faster on it is if our car was lighter (it has a full interior complete with back seat, carpet, headliner, sunroof and a steel roll cage ya know) but it was such a blast racing through a suburban neighbourhood jam packed with thousands of the local residents. And, it was totally legal (for us in the Targa of course). People were having barbecues on their lawn and driveways, patio parties and one guy was even draining his pool water onto the course at one of the turns near the finish. Surreal, it was simply surreal.

After crossing the finish line, the car got washed by volunteers with proceeds going to the Autism Society of Canada, which had its own BBQ to raise even more funds for the charity.

By the time we rolled onto the covered ice surface inside the Gander Community Centre for the nightly after rally car show, the place was packed with people. It only got busier as we handed out some Kia swag and were mobbed for autographs (it’s so cool being a rock star, even if it’s just for a week). Even cooler was having our Kia autographed by the surprised crowds, who were all too pleased to oblige. “Can I sign your car?” they’d ask. “Yes, please do!” we’d say.

We did this for a couple hours; and, even welcomed a new crew after the one we were sharing with another team left us high and dry after they found themselves out of the race on day one.

After a few tense phone calls, our team manager Cathy Laroche managed to secure us a new crew from the Kia dealership in Gander, who came to our assistance during their days off. Thank you to Gander Kia and Harry Snow, and Dean and Josh Granter, and welcome to the Targa family.

We’ll be picking up a new crew from Penney Kia in St. John’s for the last two legs of the rally.

I can only assume they’re excited to get such an opportunity to work with us. Little do they know how excited and happy we are to be able to work with them.