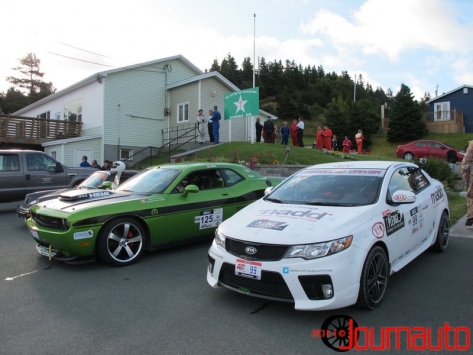 The first day of the rally was one of extremes. Full of excitement for some and disappointment for others, it’s now crystal clear why the Targa Newfoundland is considered the most difficult and gruelling motorsports event in the country.

Arriving at the Re/Max Centre before 7 AM, I was interviewed by Leigh Anne Power, host of the CBC Radio Morning Show in Gander, to discuss the connection with MADD and why it’s important to get the message out.

After that, we rolled out from St. John’s to the seaside village of Holyrood for breakfast at the Star of the Sea diner and to run the first real stage of the week.

We even managed to achieve our base time the first time out. Having incurred no time penalties, we made a quick stop at the Roncalli High School parking lot to show off the car to the students.

The next stage (Conception Harbour) we only made our Trophy time, which means we drove it fast enough to win a trophy plate at the end of the week if we can make our times on the 34 more stages we’ll run this week. Perhaps fewer depending on how many stages get scrubbed.

In Marysvale, we almost made our base time according to my stopwatch, however, issues with timing equipment means we’re unsure of the result at the moment.

By this time, several vehicles had already found the ditch, had parts torn off by the stages themselves (they’re alive you know) and/or encountered some kind of mechanical problem or electronic gremlin.

We came close to our base times on the fast, wide, smooth, flowing and cresty stages (1-4 and 1-5) in Southern Harbour where the convoy stopped for lunch. Here, a fuel leak was being fixed on the Lamborghini Murcielago; ACP’s mechanics were busy repairing the front of the RHD Supra after hitting the white picket fence of a house at a favourite Targa crash spot; one of the Mini’s had its front bumper nearly torn off; a yellow Porsche 911 thought it was a buoy in the north Atlantic ocean; and, one of the local teams blew the head gasket off their 2006 STI, which would have major consequences on 1-5.

There were obvious signs of distress on several other vehicles, but the biggest accident occurred on 1-5 when a 350Z hit the guardrail and slammed into the side of the above STI after it had pulled off on the shoulder. Both cars were written off in the event. The father and son team from Edmonton were taken to Clarenville by ambulance. The driver was later transported back to St. John’s for treatment. He’s expected to make a full recovery. The Sube’s occupants are uninjured; and, the Porsche passengers’ only bruises are to their egos.

Despite being shortened from 30 km to 20 km, the Northwest Brook stage saw a few more competitors go down with mechanicals. This fast and flowing, long bumpy run saw us nail our base time on the dot at nine minutes and 22 seconds.

The final stage of the day was the reverse of the last, however, was cancelled after the attending ambulance had to take one of the local residents to the hospital for an unknown emergency.

Through all this, the Kia Forte Koup SX is performing like a champ. We don’t want to get ahead of ourselves by any means, but Jacques and I are as glad to come out unscathed as we are day one is done.