(Targa) School is in 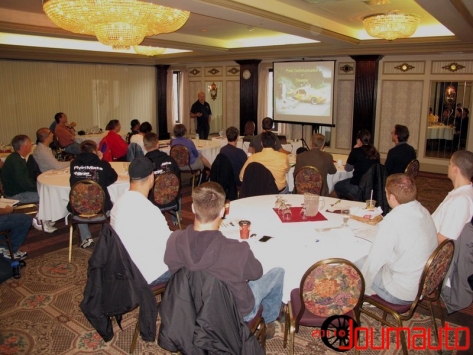 Flying into St. John’s last night, it was clear why they call this place “The Rock.” The rugged, rocky terrain is broken up (linked together) by massive forests, thousands of tiny lakes and rivers flowing toward the jagged north Atlantic coast line. The postcard towns and tiny fishing villages appear as brightly-shining pearls under a setting sun on final approach.

Touching down at 5 minutes past 7 on to what is most likely the flattest bit of asphalt in the entire province, the guy next to me says, “Beautiful night to be landing here. First time?” Indeed it is, on both accounts. Of course, I’m not here for a vacation and, most of my sightseeing on this trip will be done at speed from the inside of the Kia Forte Koup Targa car.

That’s fine by me, but I must admit the butterflies have been floating around my body the past few weeks. Fortunately, they’re now starting to calm down after Jacques Deshaies and I have just finished the first day of Targa School.

The school is run by Open Road Motorsports and comes highly recommended for first-timers. We’ll be covering more 2,200 kilometres over five days on some of Canada’s most technical roads. Conditions will vary from dry to wet to soaked and there are more than a few hazards around each of the more than 5,000 corners we’ll take over the course of next week.

Some will be taken too slow. Others too fast. And, if we encounter a moose in the middle of the road, we’re told it’s best to stuff the car somewhere instead of having a flailing moose in the cockpit with us. Today’s class focused on the basics, which means navigation, communications and team work.

Some of this I did last year while training for the 2010 Targa (refer to article), however, Jacques (a race car driver and fellow journalist) and I have never even sat in the same car, let alone driven together in a rally car, until today.

Well, we finally got that chance as part of the course today. After calibrating and performing an odometer check using our Terratrip rally computer, we head out on to public roads and follow a route book that will be similar to what we’ll get at registration on Saturday.

It’s actually a TSD (time speed distance), which emphasizes pinpoint accuracy and precision timing and is what the Grand Touring category is all about. These guys have a ton of math to do and will have but a 10 second window to complete each stage in. Go under or over the allotted times and be penalized.

Our car, however, will run in the Targa category, which means we’ll basically be going as fast as we can safely go. We’ll be penalized for taking longer than the base times set out by the rally organizers. It won’t matter if we blow those times out of the water. In fact, along with finishing every stage and crossing the finish line next Friday, that’s our goal! Well, that and to have some fun, meet new friends and bask in the endless hospitality of the people of Newfoundland, who allow this crazy automotive adventure to take place every year.