by journauto on Thursday, May 20 th, 2010 in Aftermarket, Automotive, Event, Uncategorized, Videos 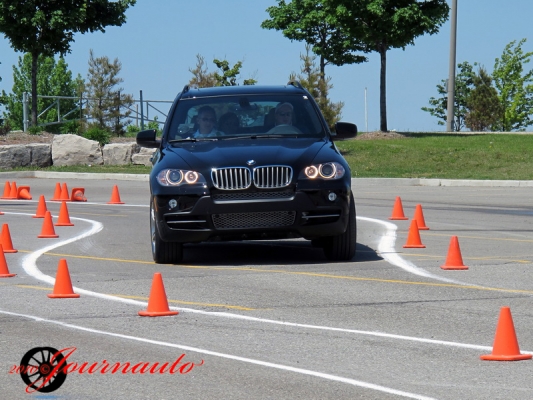 Conveniently, there was a handling course set up for us – consisting of a quick four-cone slalom leading into a sweeping right-hander with rumble strips followed by a tight R-L S-bend before a short straightaway and hairpin left into a stop.

The stop is so the instructor riding shotgun can reset the nifty performance computer stuck to the windshield and record my full ABS wet stop from 80 km/h.

They actually captured the panic braking data from the whole group (20 to 25 of us I’d say ) giving each of us three tries in each vehicle. The results were then normalized to give an average stopping distance for each tire.

The Pirelli Scorpion Verdes did this in 31.84 metres (104.5 feet) while the Michelin Latitudes did it in 32.2 metres (105.6 feet). That’s a negligible difference of just 40 cm (only 1.3 feet) but, the intent of this particular exercise (besides getting a feel for the tires) was more to debunk a myth that so-called “green tires” (all-season ones to be sure) don’t perform as well as those labeled non-green.

Besides improvements in its manufacturing processes and in other areas, using oil-free instead of oil-based materials helps make these tires greener, say the Pirelli reps. Considering the Michelin’s are pretty much industry benchmark tires, the Pirelli’s did quite well in this test.

After finishing the X5 exercises, our group moves over to the autocross handling course and into identically-prepped 328i X-Drive models with different tires for some subjective evaluations.

My friend (YouTube user SR7800t) demonstrates the short but technical course. As you can see, it only takes about 30 seconds to run it, but it is telling.

Looking closely at the tires (after everyone’s done thrashing on them) reveals more even wear on the Pirelli’s while the Contis look somewhat chewed-up. Notice the peaks and gnarls in its rubber – the white chalk used to mark out the course makes it easy to see.

Clearly, they’ve worn out faster, which helps explain why they were louder than the P Zero Nero. The Pirelli’s felt more stable from mid-corner to the exit too.

Some more food for thought? OEM tire pressures were used in both the X5 and 3 series tests.

Getting ready to watch the most important @maplele