Okay, so blogging has been one of the furthest things from my mind lately, but I can no longer neglect this space. In an effort to make it up (to myself, that is), I’ve decided to do a write-up on one of the most anticipated cars of the decade. Without further ado, I give you the McLaren MP4-12C super car… (Read on and don’t forget to check the accompanying photo gallery…)

In Toronto recently, I got to check out a pre-production version of the new McLaren supercar, the MP4-12C. But, before they officially pulled the wraps off one during the press luncheon, I’d been drooling over the 12C’s impressive carbon MonoCell chassis that underpins the mid-engine, rear-wheel drive, two-seat supercar. 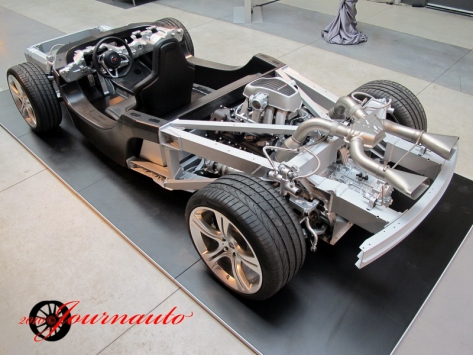 The obsessive engineers made the body from a mixture of lightweight aluminum and low density carbon composites, shaving weight everywhere conceivably possible. The floor structure of the passenger compartment weighs just 176 pounds (80 kg) and is a fully-enclosed, under-panel design incorporating both a front splitter and rear diffuser.

An open rear grille, deck venting and side-mounted air intakes take care of airflow to and from the M838T V-8 behind the passenger cell. And, like every other component of this car, the all-aluminum twin-turbo DOHC compact V-8 is pure McLaren. It features dry sump lubrication and makes 592 hp at 7,000 revs and 443 lb.-ft. of twist at 6,500 rpm and is said to propel the 2,866-pound bullet from zero-to-60 mph in less than four seconds.

A seven-speed seamless shift dual-clutch gearbox (SSG) pre-selects the next gear when the paddle shifter(s) is touched even the slightest bit. With further-prodding, the changes happen instantaneously. There are four distinct driver modes: normal, sport, winter and track, with a dedicated launch control function and air brake.

It’s a bit unintuitive to compare this car against its predecessor, but it is worth pointing out the new engine makes in the area of 155 bhp per litre of displacement. The original McLaren F1 road car gets approximately 103 bhp per litre from its six-litre V-12, which is capable of low- to mid-three second bursts to 60 mph via a six-speed tranny.

The 12C has a top speed somewhere above 200 mph, though McLaren reps aren’t yet saying or don’t yet know just how fast this thing is. It took six years before McLaren finally got the F1 road car up to its then-world record Vmax of 241 mph, so we can only guess when, if and how fast? Don’t expect a record-setting attempt anytime soon, at least not with this engine is my guess, but McLaren will build a far greater number of these (12C’s) than the earlier car.

The Formula One expertise is even more evident in the 12C’s highly advanced suspension setup designed to keep the 12C poised and balanced whether negotiating high or low-speed corners, during direction changes, under heavy or light braking and on increasing or decreasing corners.

McLaren calls it Proactive Chassis Control. Basically, the suspension is based on double wishbone with coil springs. The dampers are interconnected and controlled hydraulically to provide adaptive responses depending on both road conditions and driver preference.

The system features adjustable roll control, which replaces the need to have mechanical anti-roll bars, and also makes use of McLaren’s Brake-Steer system that was originally used on the 1997 MP4/12 Formula One race car. In fact, the whole kit and caboodle was developed and tested using the firm’s simulator technology, which is regarded as the best in the world.

Moving to inside, McLaren’s dihedral door arrangement for the 12C uses a single hinge point that offers plenty of leg sweep area for easy entry and egress to the low slung exotic. The touch entry door system is off the hook too! There are no handles to fumble with; simply touch the underside of the sculpted body work (with the key fob on you) and the door opens automatically. Not only that, the interior handles are easier to reach than the Mercedes-Benz SLS ones are, and a touch lighter to pull down and shut.

The F1 road car, of course, also came in a three-seat, centre-drive layout, but the new cockpit is more ergonomic and laden with numerous telematics and convenience features.

You get the normal stuff like airbags, leather, carbon fibre, cup holders, a premium Meridian stereo with AM/FM/USB/Bluetooth and a large portrait touchscreen GUI with 40 GB hard drive and media player for pictures and video. Even the vehicle owner’s manual has been integrated into the onboard electronics, which has the ability to self-diagnose problems and call McLaren’s headquarters in the UK to suss out those it can’t quite figure out.

McLaren also has its optional “IRIS” system – a fully integrated PC featuring a with a 80 GB HDD, more speakers and voice-controlled satellite navigation system and even a WLAN connection that lets you check e-mails and even transfer files back and forth from a home or office computer. Now that’s cool!

Along with future models within the range, the 12C will challenge the world’s best sports cars through Formula One-inspired engineering, a revolutionary carbon MonoCell chassis (the fruit of over three decades of carbon fibre pioneering), and an absolute focus on efficiency and quality. It is 100 per cent McLaren; from unique engineering to bespoke design where everything is for a reason.

With an anticipated summer 2011 launch in North America, the 2012 McLaren MP4-12C is the first in a range of high performance sports cars from McLaren Automotive.

Pricing will be somewhere between $225,000 and a quarter-million, depending on where you live. In Canada, Pfaff Automotive in Woodbridge, Ontario (north of Toronto) will arrange to ship you yours wherever that might be. Whereas there will be nine McLaren shops to pick from in select U.S. cities including Beverly Hills, Chicago, Dallas, San Francisco and Tampa Bay.

Initially, the automaker expects to build 1,000 cars a year rising to 4,000 per year when those future models start coming down the barrel. Hopefully, along with bigger, more powerful engines, they’ll come with better names than MP4-12C. As for this one, I would’ve named it the Banshee. It sounds much scarier!