by journauto on Friday, May 4 th, 2012 in Automotive, Features, News, Racing 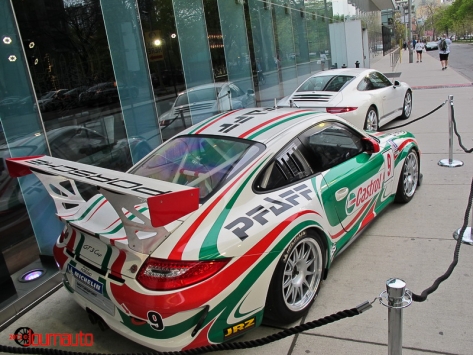 The Pfaff Motorsports team will return to the Canadian racing circuit in the 2012 Porsche GT3 Cup Challenge Canada with Castrol as lead sponsor on the No. 9 Porsche 911 GT3 racecar, which was publicly unveiled at the Thompson Hotel in Toronto this week.

Kyle Marcelli has been hand-picked to debut the Pfaff Castrol motorsports team in the 2012 Porsche GT3 Cup Challenge. With more than 10 years racing experience in 84 races, including 12 wins and 46 podiums, the 22-year-old Barrie, Ontario native is one of the country’s most exciting up-and-comers in motorsports.

“We are very excited about the upcoming race season and have great expectations for the team we have put together with Fiorano Racing and up-and-coming driver, Kyle Marcelli, behind the wheel,” said Christopher Pfaff, president and CEO, Pfaff Automotive Partners.

Marcelli’s career highlights include racing in the American and European Le Mans Series. On May 19 and 20, at the Canadian Tire Mosport Park, the open wheel specialist will race against 20 other entries in the 2012 Porsche GT3 Cup Challenge Canada opener during the annual Victoria Day Speedfest Weekend presented by Castrol Edge in Bowmanville.

With racing veteran Fiorano Racing building the GT3 race car and Marcelli as lead guest driver, the Pfaff Castrol Motorsports team is poised to be a leading contender in the upcoming race season.

Pfaff Motorsports driver Jeff Pabst will join the team as guest driver throughout the season. Pabst has more than 20 years of racing experience including the ALMS, Porsche Super Cup, World Challenge and, most recently, the Canadian Touring Car Series.

“It’s a traditional race on Sunday, sell on Monday situation,” said Joe Lawrence, president and CEO of Porsche Cars Canada, at the Pfaff Motorsports team launch party. “We’re excited to have a large field of 21 cars in the series this year.”

Developed in conjunction with the International Motor Sports Association (IMSA) and Porsche Motorsport North America (PMNA), the GT3 Cup is designed to develop new drivers and prepare them for competition in the American Le Mans Series.

Canada is the 20th country to host it own GT3 Cup series. For dates and places, check out the Porsche GT3 Cup Challenge Canada by Michelin site here.