by journauto on Sunday, October 28 th, 2012 in AJAC, Automotive, Canadian Car of the Year, Features, Photos 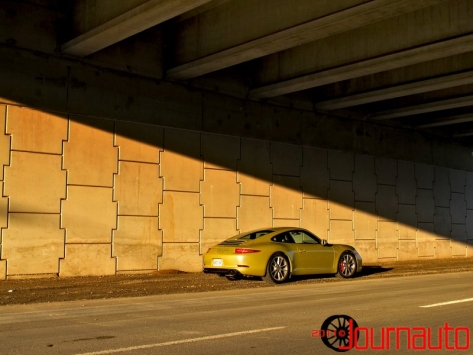 Every year the Automobile Journalist’s Association of Canada (AJAC) hosts an annual awards banquet to reward its journalist members in a host of different writing, photography and design layout categories.

For the 29th edition of this banquet, I entered six of my photos into the Pirelli Photography contest, much as I have in several years past. And, this year, I was rewarded for my efforts with a first place entry in the “Unpublished Photo” category for my shot of the 2012 Porsche 911 Carrera S, which I reviewed in the Fall 2012 issue of PRN Motorsport Magazine. There is a similar photo used in the layout on page 78, however, this is a different one that didn’t make it into the layout, much to my chagrin.

“It’s almost cinematographic! The red taillight and red brakes spice the overpowering presence of gold,” commented one of the three judges.

Though my winning photo has been seen by my peers and those in attendance at the event in Niagara-on-the-Lake, Ontario last week, I have once again decided to post all of my entries here so the other winners (and losers) and visitors of my site can see what they were up against this time. Unlike some past years, I was very happy with each of my submissions; and, I think any one of them could have been selected. Of course, all new daddies think their baby is the cutest thing on Earth, whether it’s true or not.

That said, here are my 2012 submissions for both the published and unpublished categories. Please enjoy and your constructive comments are welcome.

Congrats to all who entered the contest!