Dubbing it in the QC

Last week I was in freezing c-c-c-c-o-old Quebec to test drive the new 2010 VW Golf family. And, after driving up north to Ste. Jovite in a three-door 2.5-litre gas powered model and the new 2-litre turbo clean diesel wagon with DSG auto and tush warming, it was time for some fun and fast laps to get the blood circulating.

Not only do I get to do this on the Circuit-Mont Tremblant in the new VW GTI Mk6, here to help me eek out every last morsel of performance and learn the track are professional Canadian race drivers Richard Spenard and Patrick Carpentier. Nice! 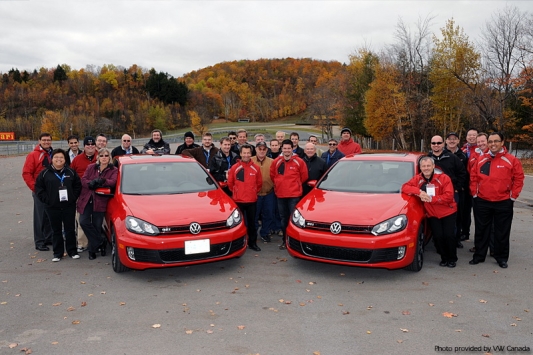 I’ve been a Carpentier fan back since before the Greg Moore days (people have even said I look like Moore actually), so I was quite taken aback by his presence. Pretty sure I met him once very briefly in the Molson Indy Toronto paddock area. I’ll get back to him in a second.

Besides getting to drive on this very cool and technical circuit for the very first time, one of the most interesting things I saw on this day was a 2.0-litre turbo engine blow a rod through the block of the car in front of me.

This car was third in a line of GTIs following Spenard during some track orientation laps and only the third lap. Coming out of turn 10 down into the gulch, I was riding shotgun in the car behind when it went ‘poof’ and then pulled off to the grass with smoke spewing from the engine compartment through every available orifice. Not sure what happened and after snapping this photo and heading into the pits, the car was never seen or heard from again.

Spenard is a several time Formula Ford 2000 and Porsche 944 Cup Canadian champ and after I familiarized myself with autocross course not far away, I took advantage of some one-on-one time with him on the North Loop. (There’s a track map at lecircuit.com) Didn’t get any pics (I was driving of course) and besides getting me to brake a bit earlier and smoother in a couple places and turn later into number four, he thought I did pretty well.

I shot the next few photos while Carpentier drove the heck out of this GTI while trying to fend off a super-quick Spenard on the full circuit’s two back straightaways.

Drafting and passing Spenard before turn 10, Patrick got passed coming out of the corner. Most of the time I was hanging on to the holy-shit handle with one hand while trying to hold the camera steady in the other with a five-time CART winner, IRL vet and current NASCAR hopeful seemingly trying to knock me off. He, while I’m hanging on like a monkey, is laughing and giggling inside his helmet so hard it’s tickling me.

It really was a fun day. I hope you enjoy the photos. Oh, and for the record, no other V-Dub’s were harmed on this day.

My preview of the 2010 Golf Family is coming soon to a Sun Media outlet near you. I’ll let you know where and when.

← Rollerman insane in the membrane
My most coveted ride at TestFest… →