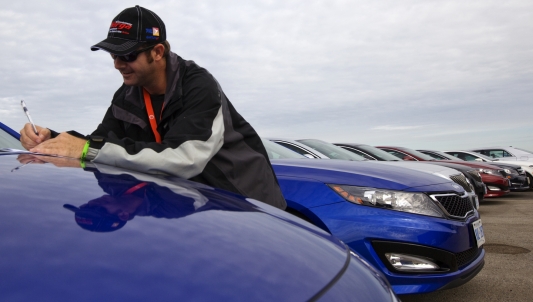 Journalist members spent four days intensively road and track testing the field of nearly 60 entries at “TestFest,” which has been held at the Niagara Drive Centre, located at the Niagara District Airport, for the past six years.

The results of the AJAC journalists’ rigorous test driving and evaluations throughout TestFest were revealed during a press conference wherein the category winners were announced.

The results were compiled by the international accounting firm KPMG and kept confidential even from AJAC until the press conference on Friday, October 29, 2011. They were determined from more than 40,000 individual data points established in the testing of 170 different vehicles.

The purpose of the AJAC Car of the Year awards is to provide consumers with a valuable resource they can use when researching the purchase of a new vehicle – one that includes a broad range of comparative information on vehicles that are new to the market. That information includes not just specifications and features but actual performance data and subjective ratings on up to 23 different characteristics – from interior roominess and comfort to ride quality and handling ability.

Our journalists’ vote results – including all of the comparative test data amassed throughout the week – is posted on the AJAC website for use as a consumer resource buying guide. Consumers that want to compare a Fiat 500 to Honda Civic Sedan or a Hyundai Accent, or an Acura TL to a Mercedes-Benz C-Class C350, need look no further than the AJAC website at www.ajac.ca > Canadian Car of the Year Awards > Results.

The 11 category winners listed above now go on to compete for the honour of becoming the 2012 Canadian Car of the Year or the 2012 Canadian Utility Vehicle of the Year. These overall winners will be announced February 16th, 2011, at the Canadian International Auto Show in Toronto, ON. Award winners for Best New Design and Best New Technology, presented by Shell Canada, will also be announced.

Looking to buy a 2011, 2010, 2009, or even an older vehicle? AJAC archives the comparative test data and vote results from previous years here.