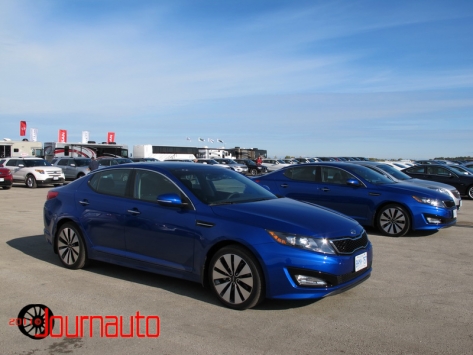 Canada’s next car of the year will be Korean! And, my money is on this Kia.

The Automobile Journalists Association of Canada (AJAC) today announced the top three finalists in its 2012 Canadian Car of the Year competition at the Montreal International Auto Show.

The winner in each category will be announced at an early morning press conference at the Canadian International Auto Show in Toronto on Thursday, February 16th.

Back in October, 70 of Canada’s top automotive journalists spent four days in Niagara-on-the-Lake conducting intensive back-to-back comparative testing of 170 “all new” or “significantly new” 2012 vehicles. This is no easy task!

Vote results were determined from more than 40,000 individual data points established during TestFest. That information includes not just specifications and features, but actual performance data and subjective ratings on up to 23 different vehicle characteristics – from interior roominess and comfort to ride quality and handling ability. The vote results were compiled on-site by the international accounting firm KPMG and kept confidential even from AJAC until the winners’ press conference.

KPMG will hand over four envelopes with names of the winners of this year’s competition at the CIAS in Toronto. The 2012 Canadian Car of the Year, Canadian Utility Vehicle of the Year and Best New Design will be announced along with the winner of this year’s Best New Technology award, presented by Shell Canada, the official fuel supplier of the event.

The 70 journalists are all members of AJAC, whose purpose is to provide consumers with sound, objective, comparative data for use as a resource buying guide when considering the purchase of a new car, truck of SUV/CUV.

Consumers wanting to compare a Fiat 500 to Honda Civic Sedan or a Hyundai Accent; or, an Acura TL to a Mercedes-Benz C 350 need look no further than the AJAC web site: www.ajac.ca > Canadian Car of the Year Awards > Results. Looking to buy a 2011, 2010, or even an older vehicle? AJAC archives the comparative test data and vote results from previous years on its website. Visit www.ajac.ca > Vehicle Comparisons for more info.

Getting ready to watch the most important @maplele