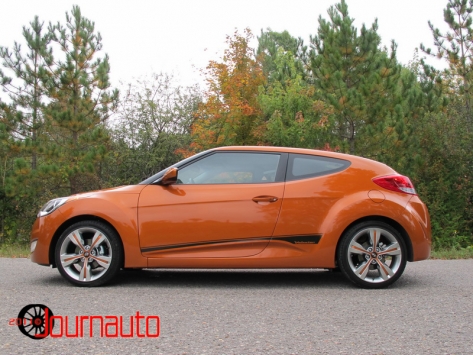 Russ Bond’s calling and he wants me to explain how the Veloster won best new sports performance car under $50,000 in AJAC’s 2012 Car of the Year competition. As if I had something to do with it.

It’s not that the Hyundai isn’t a good choice. It has a fuel efficient engine and six-speed manual transmission. For $22,499, it looks great, has a nice, functional interior and sports plenty of value. All nice qualities, none of which make it a sports car.

Following a particularly enthusiastic lapping session driving the fast and agile BMW 1M coupe on our airport runway test track during TestFest, it feels barely faster than a Prius out here on the autocross-style cone course.

Sure, it’s nicely balanced and turns well (slowly, of course) but, after a single lap, the 280 mm (11 in.) front brakes prove just how inferior they are compared to those on a real performance car such as the 1M. The Veloster can’t match the stopping power of the 360 mm (14.2 in.) front discs and four-piston calipers, and plows wide through the last turn, taking out a family of cones. One is so badly wedged into the undercarriage I’m forced to pull over so the PR rep sitting in the passenger seat can get out and extricate it for me.

The $54,000 BMW handily won the sports performance over 50 class and rightly so. It might even be the best car at TestFest. However, almost all 200 allotted for Canada are already spoken for, so buying one might be next to impossible since it’s only available in a single model year. It’s still in the running, though unlikely to be named car of the year.

Comparing the 138-hp Hyundai to a 335-hp 1M is like comparing a small handgun to an assault rifle, but you don’t need a PR rep to tell you the ECU is calibrated for fuel economy and not performance. It’s obvious.

It’s performance hasn’t been lost in translation, it was never there to begin with. Dynamic testing by AJAC reveals the Veloster is by far the slowest of the six cars it beat out in its car of the year category, sports performance under 50 grand. Zero-to-100 km/h takes 9.7 seconds (Prius V is 11.6) and seven seconds for 80-to-120.

Fuel economy is the only objective score from TestFest the other contenders can’t match. Interestingly, the scores given for emissions are sevens across the board (Buick Regal GS being the black sheep with 7.5) despite the range of powerplants – from Hyundai’s puny four-cylinder to the hulking 6.4L Hemi V8 with 470 hp and torque in the Charger SRT8 – under review.

Also of interest, four of the five other entries in this category are turbocharged (the Si isn’t); and, looking at the overall interior scores, Veloster is a solid fifth.

First runner-up is the Jetta GLI. Sporting the same two-litre turbo engine as the GTI hot hatch, it makes 200 hp and 207 lb-ft and does zero-100 in 7.6 secs, and 80 to 120 in 5.1. The cockpit is superior and space for people and things more than adequate, though the aft cabin isn’t finished as nicely as the front. It has electronic limited slip technology but no way to turn off the traction control to really enjoy the superb chassis and suspension tuning. Left-foot braking helps, but the seats are slippery so it’s hard to pull off.

Kia Optima SX takes second runner-up. Its interior is even nicer than the VW’s. Its two-litre turbo four makes 274 hp and 269 torques and still gets decent mileage. It can hit 100 km/h in 6.8 seconds, makes the pass in 4.2 seconds and, on the test track, handles even better than expected with exceptional steering, stable chassis and defeatable traction controls. Despite having the second longest wheelbase, overall length and the second-heaviest curb weight (behind only the SRT8 in all three) it responds well to driver inputs and can be tossed into corners for more enjoyment.

By my tally, the RWD four-cylinder turbo-powered Mercedes-Benz C250 coupe blew away the category in every aspect with the optional $1,900 sport package. But there’s no AMG badge and no stick shift. The expensive premium options, metallic paint and media interface upgrades don’t really add anything (except for $4,275 to the as tested price). It’s relegated to fourth place.

Next, the Honda Civic Si is a performance bargain for $25,990 with its 201 hp/170 torque 2.4L four-cylinder engine with iVtec offering a near-perfect blend of performance, economy and reliability. A mechanical limited slip differential, superb steering, well-tuned suspension and on/off traction controls make this chassis the most responsive and fun to drive. The six-speed manual is crisp and the Si powerband robust enough to enjoy this car to its fullest on lapping days, and yet not too aggressive for the daily grind. Had Honda done more to improve the interior quality and materials (instead of just technology and ergonomics) on the ninth-gen Civic, it would’ve finished higher than fifth.

The Buick Regal GS is one point behind the Veloster (fourth and fifth respectively) by my scorecard, yet claims sixth place. Its got some balls, is surprisingly smooth on the track and is sporty enough for consideration. It just doesn’t look very sporty.

The SRT8 is a great car with tons of performance and character straight from the showroom. It even has updated SRT performance pages (accessible via the huge touchscreen monitor) to keep track of various acceleration and braking timers, as well as g-forces and steering angle. It reaches 100 in 5.3 seconds and the Hemi has a sport mode as well as cylinder deactivation, so it does the Jekyll and Hyde thing well. Despite placing last, the SRT8 has more performance mojo in its tiny computer brain than the Veloster has total.

The real kicker here is that it might very well be the next Canadian car of the year. Of the eight remaining finalists, three wear the Hyundai badge – other two are the $16,599 Accent and $22,699 Elantra – and I have no doubt one of them will win it all. If fuel economy really is the new performance, the Veloster is a shoe-in.

Hey Russ, can you hold the line? Hyundai’s calling – they’ve just announced a 204-hp 1.6L four-cylinder turbo will be available on the 2013 Veloster. Doh!

What should have won this category? If not the Mercedes, then the Honda Civic Si hands down.

Visit the gallery here to check out the other cars in the “Sports/Performance (under $50,000)” category and leave your comments at the bottom of this post.